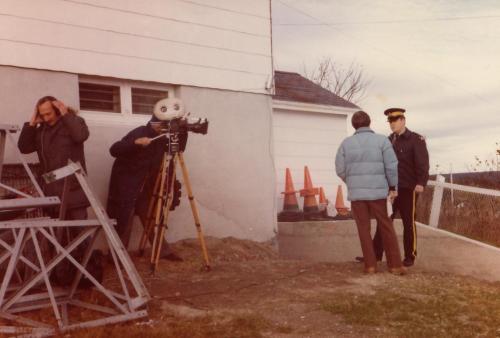 This is probably the most well known sighting in Newfoundland. I have copies of official documentation of this event.

On November 26, 1978. A Mr.Chester Lethbridge and his wife, reported to the RCMP a strange object in the sky for the second time over the duration of approximately one week over Random Island, Trinity Bay, Newfoundland.

RCMP Constable James Blackwood, an officer on location at the time went out to the Lethbridge home to investigate. Upon arriving he also saw this strange unidentifiable object in the sky. Both Mr. Lethbridge and Constable Blackwood describe the same thing: A cigar-shaped object with a curved tail, in the sky with blue, red and yellow flashing lights. It ranged from about thirty-five to forty feet in diameter and hovered approximately five hundred feet above sea level with no movement. The object also cast a shadow on the water, so he knew that what he was seeing was not a satellite or distant plant like Venus

This object was also being tracked by the Department of National Defense, Gander, NF. After observing the object with the naked eye for a while, Constable Blackwood took out this ball scope, a device used to amplify light sources in the night, to observe the object. This was definitely not a plane nor like any other aircraft Blackwood had ever seen. After observing the object in the sky for a little while longer, Constable Blackwood decided to turn on the flashing lights on his police car, Mr. Lethbridge, however, did not approve of this and went inside.

Constable Blackwood flicked on the flashing blue and red lights on his car, and within seconds the object in the sky imitated the pattern of flashing lights. Constable Blackwood was speechless, being interested in different types of aircraft as a hobby, Blackwood confidently says that though the craft was about the size of DC9 aircraft, it was definitely not a plane; it did not resemble any type of plane ever built to his knowledge. It had no wings and made no noise; it had a curved tail and a cigar-shaped body and that was all, besides the flashing lights. After a period of about two hours, the object “left the scene like a shooting star, only in the opposite direction.”

An authority with the NRC by the name of A.G. MacNamara responded to these reports by saying: “The objects were most likely the planet Jupiter, which is quite brilliant. It appears about midnight in mid­ October and is near the Mediterranean Sea. Saturn and several other bright stars are also visible in the Eastern sky at this hour of the night”. Constable Blackwood was quite disgruntled at these comments by Mr. MacNamara, and the fact that MacNamara was making these assumptions without even talking to him or any of the witnesses of the sighting.

Blackwood assured me in a 1997 phone interview, that it was not the planet Jupiter nor was it Venus or any other star or planet, for he had seen these in the sky and was positive that this was not what he had witnessed hovering over Random Island for two hours. It must be kept in mind that the object seen by Chester Lethbridge, his wife and Constable Blackwood did cast a shadow on the water, and planets; stars and satellites do not cast shadows.

Blackwood has retired from the RCMP and no longer lives in Newfoundland.

James Blackwood’s sketch of the object: