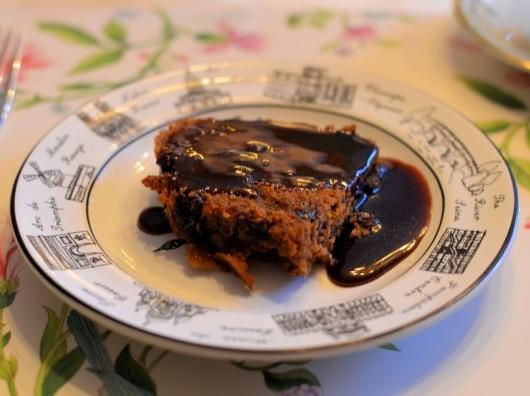 
To make breadcrumbs soak dry bread in enough water to soften. Drain and squeeze bread to remove excess water. Break into crumbs and measure 2 cups. Mix crumbs, raisins, molasses and melted butter. Them combine baking soda and water to crumb mixture. Mix well. Grease 4-cup molds and pour pudding into the mold. Cover top with a piece of greased foil and fold over the sides of the mold to keep steam out. Place molds in a large pot and add boiling water till it reaches the halfway mark on the molds. Cover and steam for 2 hours or until firm to touch. Serve with Molasses Coady (below).

In a saucepan, combine ingredients. Heats to a boil then simmer, stirring occasionally, for 10 minutes. Serve over Figgy Duff.

One thought on “Figgy Duff Recipe”