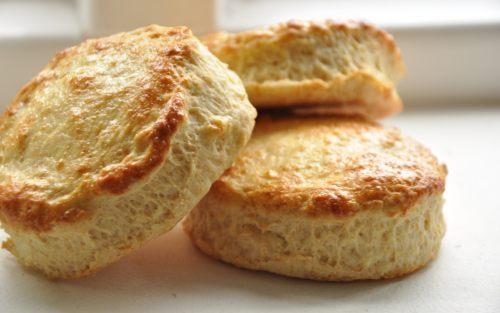 Preheat oven to 450 degrees Fahrenheit (which is gas mark 8)

Sift into a bowl the flour, baking powder, and a pinch of salt, make sure when you sift it, that it’s right airy. Cut in the butter, then rub it and the flour mixture until it looks as bread crumbs do. After that, stir in the sugar. Now, add the milk and mix it until it’s a light dough.

Put the dough on a flat counter and gently knead it, not too much, don’t overwork it. Now, roll it to about 2 inches thick.

Take a small cup, and cut out the scones into circles. You can keep re-rolling the dough so you can get the most of it. Put them on a greased cookie tin, and in a separate bowl mix one egg and a drop of milk or cream together, then take a brush or something like that, and spread the milk and egg mix lightly over the scones. This will add a nice brown colour and taste to them.

Bake for 7 to 10 minutes or until they’re lightly golden brown.

Sit down, pour yourself up a cuppa tea, and have a feed. They’re grand with butter or some molasses, or jam and creme.

You can half the milk to 75ml, and add 75ml of molasses. Cut the sugar by 1/3 an ounce too. The dough won’t be as light, but they’re still good.

With the dry ingredients, you can add a bit of ginger, allspice, cinnamon, or something along those lines to make it more savoury.

When you’re putting the ingredients in, fold in raisins or currents and they turns out much nicer and moist!